First published on my classics blog, Memento, on 2 October 2014

The Copa is a short poem, presented as the song of a hostess at a country inn.  It is one of a number of short works attributed to the great Roman poet Virgil.  It has been much admired by critics, but it is unlikely to have been written by the great man himself.

First published on my classics blog, Memento, on 9 November 2014 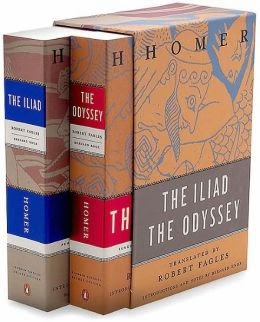 The Indo-Europeans and PIE

First published on my classics blog, Memento, on 9 November 2014.

You don't have to have spent long learning Latin and Greek before you realise that the languages are related somehow.  It doesn't take a genius to work out that fero, fers, fert is related to phero, phereis, pherei ("bear, carry").

Email ThisBlogThis!Share to TwitterShare to FacebookShare to Pinterest
Labels: history

Aulus Gellius and obeying your father

Aulus Gellius (flourished 2nd century AD) was a Roman judge and writer who deserves to be better known than he is.  He compiled a large collection of literary, historical and philosophical trivia known as the Attic Nights (he chose the name because he composed the collection during winter nights in Attica in Greece).  It's fascinating stuff if you happen to be interested in the peculiarities of Roman culture.

Eurycleia the slave - An interesting passage from the Odyssey

First posted on my classics blog, Memento, on 21 September 2014.

In this post, I want to look at an interesting passage from the first book of Homer's Odyssey.

The "he" in the passage is the hero Odysseus' son, Telemachus.  At this point, Telemachus is living in Odysseus' palace and waiting for his father's long-delayed return from the Trojan War.  Laertes is Odysseus' old father, who is now living in retirement:

The second time as farce?

If a newspaper columnist had predicted in January of this year that, by September, there would be a majority Conservative government and Jeremy Corbyn would be the leader of the Labour Party, he or she would have been laughed at.  Well, we're not laughing now.

Some thoughts on the UK general election

Here are a few random thoughts on the election results.

Lutfur Rahman - More on the judgment

There has been some critical comment in the blogosphere on Judge Richard Mawrey QC's judgment in the electoral fraud case against Mayor Lutfur Rahman of Tower Hamlets.

Lutfur Rahman and the Strange World of Tower Hamlets

Lutfur Rahman, the Mayor of Tower Hamlets, has been found guilty of electoral fraud by an Election Court and removed from office.  This follows several years of controversy over the former Mayor Rahman's policies and conduct in office.

Hitler and I, Otto Strasser

This is an intimate account of Adolf Hitler from a dissident member of the Nazi Party.  Otto Strasser was a journalist and former army officer who was forced out of the party in 1930 and wound up living in exile in Canada.  The book was published in 1940.

This is arguably the best one-volume general introduction to the Third Reich that currently exists in English.  Burleigh manages to tell a very familiar story with range, depth and empathy.  It is a magnificent achievement.

The Fall and Rise of Reginald Perrin

Note: "Reggie Perrin" was my original internet pseudonym, and this blog used to be called "Reggie's Blog".

I took my nom de net from this cult BBC comedy classic.  Originally broadcast in 1976-1979, it chronicled the nervous breakdown and subsequent improbable adventures of a middle-aged office worker.

The Letters of the Law

English law has spawned not only a vast body of technical writing but also a body of what can more convincingly be called literature.  In this post, I want to survey some of the most outstanding examples of English legal literature.